X-ray cameras are used to detect porosity, inclusions, cracks and even grain structure within a variety of cast components and in welded joints.

With the increasing production of many new types of components such as BGA and flip-chip devices, it is important to produce good quality, real-time, X-ray images to isolate dry joints, bridging/shorts, voiding, misplacement and misalignment problems down to few microns or less resolution.

A high-resolution camera can be used in conjunction with high geometric magnification in order to keep a system that includes moving stages compact. The same kind of set up can be used for inspection of the latest ceramic, plastic and composite structures as well. The latest cameras released by PSEL will typically achieve better than 25 microns minimum feature detection without geometric magnification thus allowing compact design and large field of view coverage.

Simultaneous read out and exposure cycles are used for keeping the duty cycle as close as possible to 100%, thus enabling the highest PCB/sample inspection throughput. 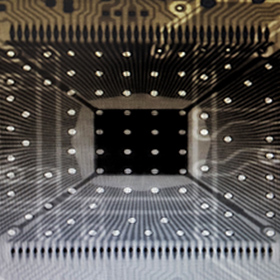