The contrast in X-ray images is normally generated by the difference in X-ray absorption for different materials. The X-ray absorption coefficient is roughly proportional to the fourth power of the atomic number Z, making the imaging of objects consisting of low Z elements like carbon, nitrogen and oxygen difficult.

For nearly all elements the real part (d) of the complex index of refraction n (n = 1 – d + ib) in the X-ray region is larger than the imaginary part b. Consequently, a very subtle variation (phase shift) is introduced in the X-ray path, resulting in contrast changes around the edges of an object as light and dark fringes. Those are high spatial frequencies that can only be sensed by a very high-resolution detector with excellent MTF response and good dynamic range trying to image subtle intensity changes over a large background is problematic.

A highly spatially coherent X-ray source combined with a very high-resolution detector can be used to produce a phase contrast imaging set up. Phase retrieval software can be offered for recovering quantitative information of a sample with known density, thus helping to refine 3D tomographic reconstructions. 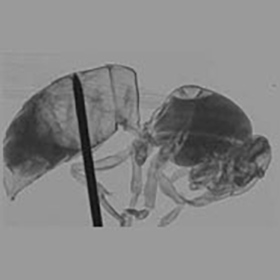