For more than 25 years, Photonic Science has been supporting SilviScan with imaging systems allowing us to provide services to the global forestry and forest products industries, wood science and climate research. SilviScan is a suite of instruments for the rapid and automated measurement of a range of wood properties in large numbers of cores taken non-destructively from standing trees (Figure 1). 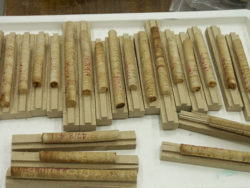 The system in (Figures 2 and 3) relies on imaging technology to obtain all the data necessary to calculate many properties such as growth rate, cell cross-sectional dimensions, density and stiffness at high resolution. 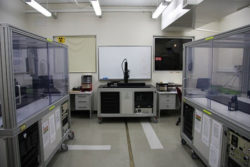 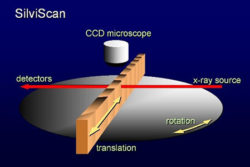 In 1995 I needed a sensitive X-ray diffraction camera to greatly increase the speed of X-ray diffractometry on SilviScan. Photonic Science quickly produced a highly customised cooled camera with a large diameter fibre optic, an image intensifier and integration facilities, reducing our diffractometric measurement time by 2-3 orders of magnitude. I have since purchased nine more Photonic Science cameras for the development and construction of four SilviScan systems.

There have been three generations of my system. SilviScan 1 (designed in 1990) used the traditional photon counting X-ray techniques and a low resolution video camera for image analysis. SilviScan 2 (designed in 1995) used two optical fibre coupled and intensified Photonic Science cameras: one for X-ray densitometry and the other for X-ray diffractometry. SilviScan 3 (designed in 2001) is the current system (Figure 2) and uses three Photonic Science cameras for image analysis, densitometry and diffractometry, as described below.

There are three major parts to SilviScan, each requiring a different type of camera. 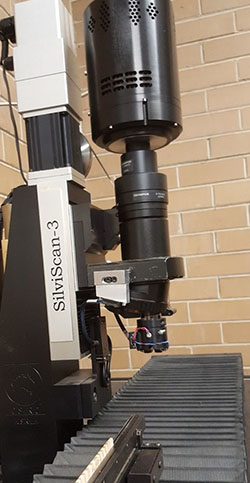 The first is the Cell Scanner (Figure 4) which uses two techniques to image the polished cross-section of wood samples (Figure 5) cut from increment cores (or any other sample prepared in a similar way). The thermoelectrically cooled Photonic Science sCMOS 2k x 2k camera is used to view the wood surface in both reflected light (blue, green, red, infrared – provided by our LED lighting system) and transmitted light from red to near infrared LEDs directed below the surface of the sample. 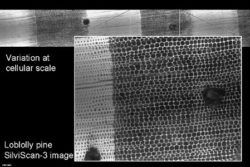 The reflected light is used both for focussing and for imaging the wood cells. Long wavelength transmitted light enters the wood below the polished surface and travels along the cell walls. The light appears at the polished cell wall cross-sections (Figure 6) and gives better contrast than does reflected light. These images are used to calculate the wood cell diameters in the radial and tangential direction in the trees and at 25 µm intervals from pith to bark. The raw images have a pixel size of 0.6 5µm but the final data are binned to generate radial wood property profiles at 25 µm intervals.

The second part uses a Photonic Science FDI CCD camera with a 1:1 fibre optic for the measurement of wood density (Figure 7). The sensitive rectangular area measures 11mm diagonally. This camera uses the attenuation of X-rays in the sample to determine wood density according to a modified Beer’s law. Every pixel is calibrated as an independent detector to give 2D density images (Figure 8). The pixel size is about 6 µm at the detector surface but the density profiles are generated on a 25 µm interval scale to match the data from the Cell Scanner. 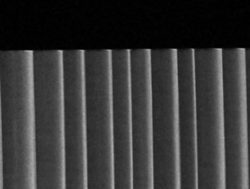 The third part uses a Photonic Science Gemstar camera with a 75mm fibre optic reducer connected via an image intensifier to a CCD detector (Figure 9). Diffraction patterns are obtained in 5-30 seconds and used in conjunction with the other two systems to estimate microfibril angle, wood stiffness, strength, cellulose microcrystal properties, fibre orientation and shrinkage potential depending on species. Colourised examples of diffraction patterns for different microfibril angles are shown in (Figure 10). Microfibril angle is the orientation of the load-bearing long chain cellulose molecules with respect to the cell axis. Low angles result in high stiffness and strength. (Figure 11) shows the progression in X-ray diffraction peak shapes from pith to bark in a spruce sample. Broad peaks near the pith indicate high MFA and low stiffness and narrowing peaks towards the bark show decreasing MFA and increasing stiffness. 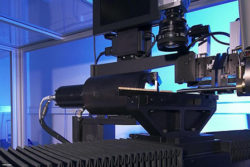 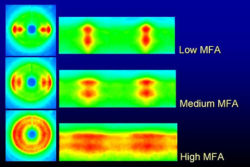 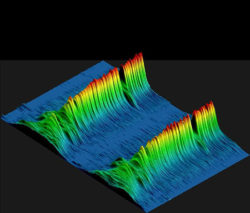 Figure 11. Stacked X-ray diffraction peaks from pith (left) to bark (right) showing a band of compression wood towards the bark.

“The expertise and dedication of the Photonic Science team has played a significant role in the success of
SilviScan and is greatly appreciated. “

“Photonic Science cameras are at the heart of the SilviScan system which has won many Australian and
International awards, including the L.R. Benjamin Medal, the CSIRO Chairman’s Medal, the ATSE Clunies Ross
National Science and Technology Medal, and Sweden’s Marcus Wallenberg Prize – regarded as equivalent to a Nobel Prize in this field of science. SilviScan-3 is installed in
Melbourne, Stockholm and Vancouver.” 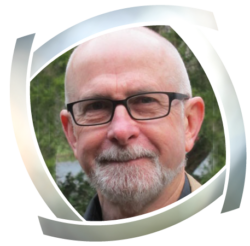 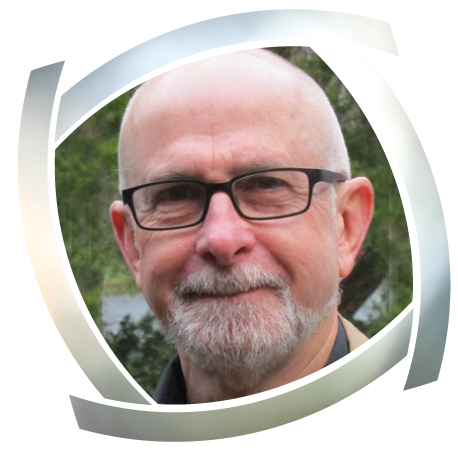