Optical imaging is a deeply complex field that exploits increasingly wide portions of the electromagnetic spectrum to accomplish a range of objectives. Microscopy, for instance, uses visible light to magnify samples and investigate their minute characteristics. Significant technological advances have enabled various forms of electromagnetic radiation to be used in analytical environments, including X-radiation.

X-ray imagery is now a crucial technology in both industrial and medical environments, providing the novel capability for seeing through opaque surfaces to visualize internal structures. One of the most advanced forms of X-ray imaging in use today is known as microtomography.

To understand how microtomography works, it is worth exploring some of the basics of X-ray imaging.

X-ray imagery is best known as a tool for medical diagnostics. It uses X-radiation, a form of sub-visible, high energy electromagnetic radiation that can penetrate most matter. Wilhelm Rontgen, the physicist credited with the discovery of X-radiation, immediately recognized the clinical potential of X-ray imagery. The first imaging systems to use X-rays employed experimental electrical discharge tubes and fluoroscopic screens to capture radiographs. Today, the systems we have available to us are significantly more sophisticated.

By leveraging penetrative X-rays with tomographic methods of image capturing, analysts can obtain precise three-dimensional renders of an object’s internal structure with outstanding levels of spatial resolution. This is achieved by imaging the entire object cross-section by cross-section using multiple projection radiograms. In medical settings, this setup forms the basis of X-ray computed tomography, otherwise known as CT scanning. Microtomography, sometimes referred to as micro-CT or high-resolution X-ray imaging, operates on the same principles but at significantly smaller scales.

What is X-ray Microtomography?

Based on the definition given above, X-ray microtomography is a technique used to create a virtual 3D model of an object using ‘slices’; discrete 2D cross-sections with pixels on the order of micrometers (µm).

In microtomography, an object is typically placed on a rotation stage between an X-ray source and a detector. X-rays are generated, transmitted through the object, and detected, then the stage turns and the process is repeated at increments throughout a 180° or full 360° rotation. This series of X-ray images is computed and combined to reconstruct a full 3D model of the object non-destructively. The ability to acquire volumetric information from an object without physically altering the structure is incredibly valuable. Consequently, its applications are practically limitless.

At Photonics Science, we champion superior resolution X-ray imaging with a range of specialist X-ray detectors suitable for microtomography applications. If you would like to learn more about using our products for high-resolution 3D imaging, simply contact a member of the Photonics Science team today. 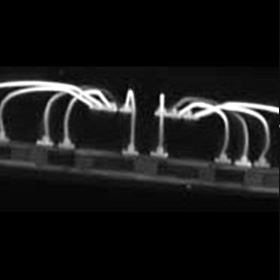